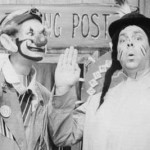 Daryl Laub as T.N. Tatters and Rodger Kent as an Indian Daryl Laub originated two children’s TV characters on WTCN, Channel 11 called Skipper Daryl and J.P. Patches. When he went over to KSTP-TV Channel 5 in April 1955, Daryl brought his alter egos with him — albeit in slightly different guise: Skipper Daryl became […]

Here’s Captain Daryl handing out “autographed” pictures of himself at a personal appearance. 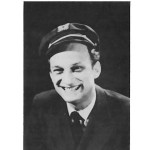 Captain Daryl was much more sedate than T.N. Tatters, Daryl Laub’s other KSTP character. One of the odd regular features on his show was a toy judge and jury passing judgment on a “case” submitted by one of the young viewers. Cases usually involved issues such as brothers who picked on their younger siblings or […]