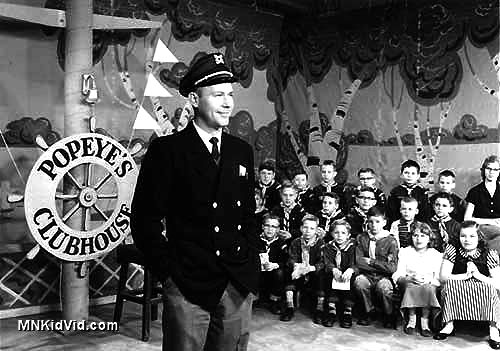 Starting in 1956, the Popeye cartoon series were sold to local television stations around the country and most every market had a Popeye program hosted by a local TV personality.   Los Angeles had Skipper Tom Hatten and Miami had Skipper Chuck Zink.   New York had Captain Ray Heatherton and Detroit had Captain Jolly.   The Officer Don Popeye Club was a long time favorite in Atlanta.    Minneapolis was no different.

Popeye’s Clubhouse was a WCCO-TV show that ran for a number of years, and went through a succession of hosts. The first was well-remembered pitchman Mel Jass, who left WCCO-TV for WTCN-TV in 1957. With Mel gone, command of Popeye’s Clubhouse passed to Dale Woodley, shown above on the set with the day’s Peanut Gallery in the background. In 1959, yet another host took over: Jack Hastings, who earlier had been cowboy character Johnny .44!

Later in the mid-60’s, Popeye and Pete on WTCN featured Popeye cartoons hosted by Dave Lee.

You can view rare TV clips and photos from various Popeye shows around the country on TV Party.