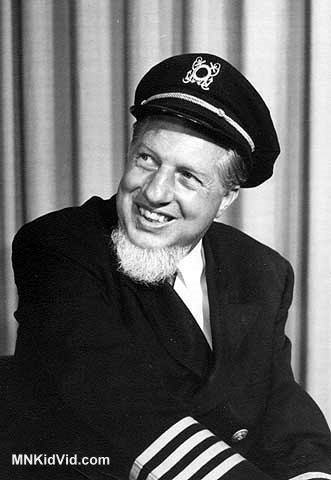 Ken Wagner entertained Minnesota children from 1960 to 1973 on KMSP, channel 9.  When the show began, Wagner was known as Captain Ken, a character he originally created for WOC-TV in Davenport, Iowa.   In later years, the Captain retired and was known to viewers as Grandpa Ken.    A talented artist, Wagner would often sketch out drawings, starting from simple lines and shapes, developing portraits and caricatures.     In addition to a regular selection of cartoons, the program featured puppets such as Calliope the Turtle.

Ken Wagner grew up in Iowa.  He was born in 1911 in Council Bluffs.   His family moved to Mason City in 1927, where he developed his artistic talent and would work at the local movie theater.   He found work at a local printing company where he created poster art for traveling circuses.  His interests in photography and film led to owning his own movie theater in the 1940’s with his wife Lavinia.

In 1949, WOC-TV was launched in Davenport, Iowa, and Wagner pitched a program called Comic Cutups which became very popular.   The show featured Ken drawing a pictures with an audience of local children guessing what he was drawing.   The puppet, Pee Wee the Clown would interact with Ken and the visiting children.    Cartoons, such as Scrappy  were shown. 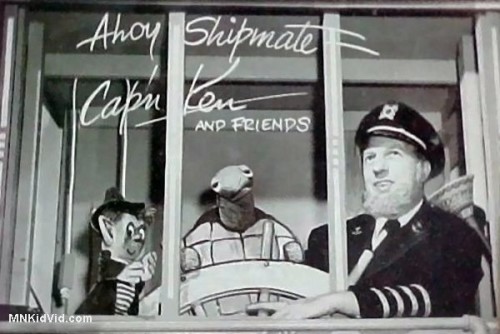 Starting in 1956, Wagner hosted Captain Ken’s Cartoon Showboat, portraying the captain of a riverboat called the Dixie Belle.   The show featured a growing number of puppets.  In addition to Pee Wee, there was Tommy Sawyer and Calliope the Turtle.   Wagner’s children helped out with the show, working many of the puppets.  Ken, Jr. worked Pee Wee while his daughter Linda voiced Tommy.   The program featured  cartoons and Three Stooges shorts.

In 1960, Ken Wagner packed up and moved to Minnesota to join KMSP, channel 9.   KMSP had recently lost Dave and Pegge Lee’s programs when they moved to Florida.    The new show, Cap’n Ken, featured the Dixie Belle, along with Pee Wee and a new version of Calliope.   In 1967, the program was reworked into Grandpa Ken, where Wagner retired to his cottage.   The format remained much the same with Wagner creating pictures, visiting with his puppets and hosting cartoons.   Grandpa Ken went off the air in 1973.

In addition to his television career, Ken Wagner wrote a number of children’s books including The One Word Storybook.   He continued to work as an artist at KMSP after the show ended and retired in 1975.   He traveled around the country with his wife Lavinia and lived in California near his two daughters.   Ken Wagner passed away December 10, 1990.