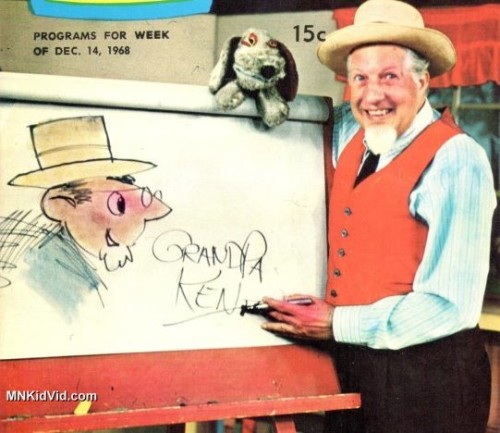 Delayne remembers “when I was a small child I spent most of my time with my dad at KMSP-TV,  Channel 9, where the grandpa Ken show was filmed.   My dad was Uncle Russ, I think the Wednesday guest.”   She adds that “my dad Russ was life long friend of Ken Wagner.”   She continued, “If there were small children on the show, quite often it was my siblings and me.”

Russ Nyberg would appear on the show and discuss various hobbies of interest to childern.   Dalayne recalls that “he would bring odd items to show on tv. I remember one time when our cat had died, our dog Gidget nursed the kittens right along side her puppies.”   Russ brought them to the studio to appear on the show.

According to Delayne, Russ Nyberg lived an interesting life.    She says “He ran away from home at 17 and became a musician for the circus. He played for the circus midgets, who were clowns and would all climb in cars and such.”   She adds, “all of his friends worked on the Wizard of Oz.”    It was the only work he could find.

When Delayne was 6, her father took her to the circus when it came to town.   “Whenever the circus or carnivals came to town we would get to go and visit his friends.”   She recalls, “When I was six, it was my golden birthday and the circus was in town.  I got to ride with the pretty lady on the horse and the whole circus sang “Happy Birthday” to me. I also had a chance to ride the biggest elephant. ”

Delayne fondly remembers her father.   “He was really quite a man, who made friends everywhere he went.”

We don’t have any pictures or surviving video of Russ Nyberg on the Grandpa Ken Show.    As with most of the children’s programming from that era, little survives.   Many programs were broadcast live.   If they were taped, the video tape was reused.

If anyone has any photos or memories of Grandpa Ken, or Russ Nyberg, please contact us!    My special thanks to Delayne Nyberg Strand for sharing her memories with us.