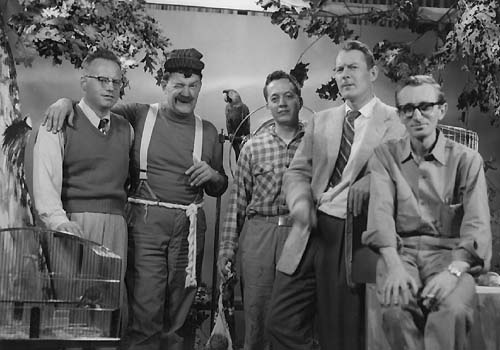 Don Stolz (center) with Axel and others in 1954

The legendary Don Stolz has passed away at the age of 97.   He’s long been known as the owner and creative force behind the Old Log Theater in the Twin Cities, but he his role in children’s TV is why we remember him here.   He worked closely with Clellan Card on WCCO’s “Axel and his Dog” program, as the puppeteer for Tallulah the Cat and Towzer the Dog.

Don Stolz had worked in radio and television before devoting all his time to the Old Log Theater.    He sold the theater in 2013, retiring at the age of 95.    Among his many honors, he was recieved the Ivey Award for Lifetime Accomplishment in Minnesota Theater in 2008 and was inducted into the Minnesota Broadcast Hall of Fame in 2006.

For more about Don Stolz, check out these links