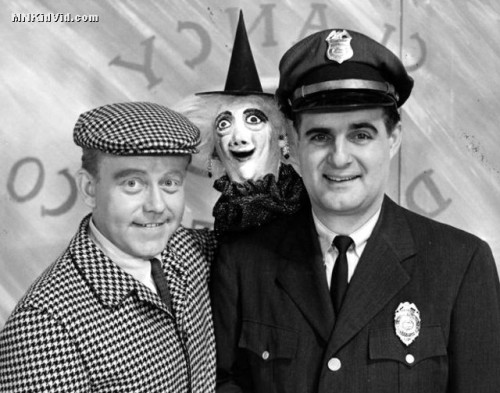 I’ve heard this story repeated many times, but now I’ve been able to track down a little more information.  The story goes that Commodore Cappy was talking to Vivian Vulture about Valentines Day.  Vivian told the Commodore that she wasn’t going to get any Valentines and that she had never received one.  Of course this lead to a flood of Valentine’s cards coming into WCCO.   John Gallos said they received 10,000 cards.

There’s a little more to the story as noted in this article from Broadcasting magazine dated March 24, 1958.    According to the article,  Vivian Vulture started as a scarey half bird, half witch who introduced Bugs Bunny cartoons.  Unfortunately, many children were having nightmares about Vivian.   In response to this, Gallos brought out a “character conversion ray gun” and Vivian promised to be  a good.   This lead into the conversation about not receiving any Valentine’s cards.    The article says the station received 4600 cards.   The photo shows Commodore Cappy buried in Valentine’s Day cards.   Unfortunately, I don’t have a clearer images for you.

Vivian Vulture was originally played by Don Stolz and later by Allan Lotsberg.   Commodore Cappy would become Clancy the Keystone Cop, then Clancy the Space Cop, and finally Clancy the Cop who was partnered with Willie Ketchem.    Here’s a little clip from an interview with John Gallos where he talks about the flood of Valentine’s Day cards.