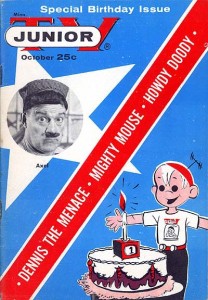 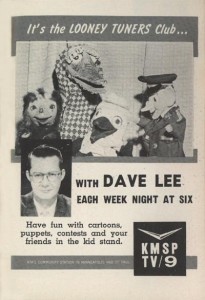 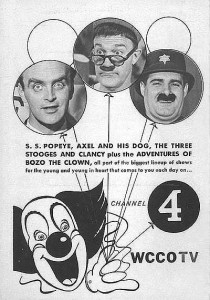 TV Junior was a TV Guide for young baby boomers published during the late 1950s. The monthly magazine carried articles about network programs such as Howdy Doody and Dennis the Menace, as well as activity pages that were often tied to local kidvid personalities. This must have required many different editions of the mag for various regions around the country, as suggested by the notation “Minn.” in the upper left corner of this October 1959 edition. What a logistical nightmare for the publisher ­ but what a cool collectible for TV fans today!

The ad in the middle features the Loony Tuners Club on KMSP, hosted by Dave Lee and featuring Pete the Penguin, Fragrant the Skunk, Omar the Alligator.

The back cover featured an ad for WCCO-TV’s slate of children’s shows. The Three Stooges and Clancy (shown in the right balloon) and Adventures of Bozo the Clown (illustrated at the bottom) were both new shows, and Jack Hastings — formerly Johnny .44!, shown in the left balloon — had just become the new host of S. S. Popeye (previously Popeye’s Clubhouse).  Axel, of course, is on top.