I recently spent a day researching Twin Cities kids shows at the Pavek Museum of Broadcasting.   I’ve been trying to document exactly when these show started and ended.  You’ll find a lot of those results posted on the Timeline page. 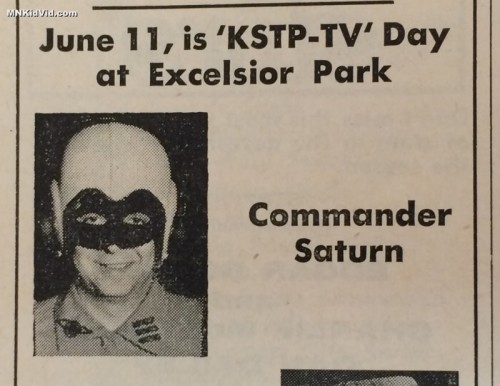 And while digging through stacks of old TV Guides, I stumbled on a blurb about a new show which debuted in 1955 called Commander Saturn.    I’d never heard of this program before.   You can imagine my excitement when I stumbled upon a long forgotten kids show.

The earliest reference I can find for Commander Saturn is February 1, 1955 according to TV Guide.   The show aired on KSTP, channel 5, in the slot previously occupied by Jimmy Valentine’s show Boots and Saddles.   Commander Saturn was played by Lan Singer.   I can’t find much information about Lan Singer, except that he joined channel 5 at the start of 1955 and had previously worked at WCAN-TV in Milwaukee, Wisconsin. The show appears to have been short-lived and was off the schedule by October 1955.

There was a special “KSTP Kids Day” at Excelsior Park on June 11, 1955.   Commander Saturn was there, along with Jimmy Valentine and someone called “Texas Stan.”   At this time, I am not sure who “Texas Stan” was.   According to TV Guide, there would be free soft drinks and free rides.

So does anyone have further information about Lan Singer or Commander Saturn?  And who was Texas Stan?   Please contact me if you have more info!

Special thanks to the Pavek Museum of Broadcasting