Commander Saturn appeared briefly on televisions in the spring and summer of 1955.   The show ran weekday afternoons on KSTP-TV, Channel 5, and was off the air by fall.    Commander Saturn was played by Lan Singer, and few details were known about him. David Singer, Lan’s son, recently contacted me and provided some further information […] 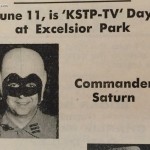 I recently spent a day researching Twin Cities kids shows at the Pavek Museum of Broadcasting.   I’ve been trying to document exactly when these show started and ended.  You’ll find a lot of those results posted on the Timeline page. And while digging through stacks of old TV Guides, I stumbled on a blurb about […]