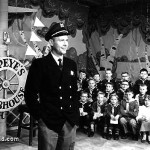 Starting in 1956, the Popeye cartoon series were sold to local television stations around the country and most every market had a Popeye program hosted by a local TV personality.   Los Angeles had Skipper Tom Hatten and Miami had Skipper Chuck Zink.   New York had Captain Ray Heatherton and Detroit had Captain Jolly.   The Officer […]