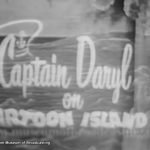 Captain Daryl on Cartoon Island, starring Daryl Laub, was one of the most popular kid’s shows on Twin Cities television in the late 1950’s. It featured a distinctive, goofy theme which opened and closed the program. Pat Sweeney, one of the leading experts on Minnesota kids shows, has just identified this tune. He was watching […]