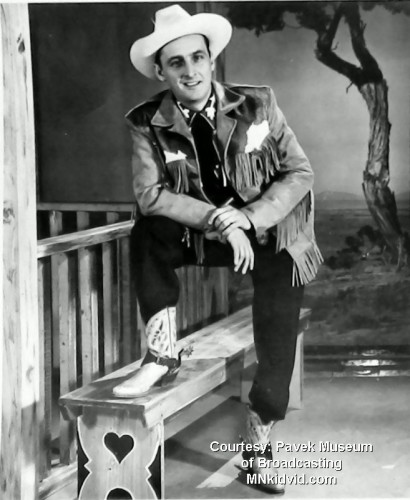 Prior to hosting the Sheriff Sev program,  Widman was a popular DJ in the Twin Cities.  In the early 1940’s, Sev Widman launched ” Studio Party Wham” a midnight program on WMIN Radio with his friend Leigh Kamman.   The show featured big band and jazz music.  It was broadcast from a club called “Mitch’s” where the audience was quizzed and awarded free dinners.  He left WMIN in 1945.

In 1946 he was hosting Lets Turn The Tables, a midnight radio show on KSTP.  Here’s a little story from the Morgan County Newspaper dated Dec. 5 1947:

Some disc jockies actually give Advice to the Lovelorn.  For instance, a Minneapolis teen reports that one Sev Widman, the local platter spinner, has patched up many a lovers quarrel.  One boy wrote in a request for a certain recording because it was his girls’ favorite and they had just broken up.  Well good old Widman had the boy on his program a few nights later and told all the circumstances leading up to his sad case.  He asked listeners to send in their opinions and before you could play Ted Weem’s “Heartaches,” the couple has reunited.  Which proves that Life Can Be Beautiful or Should a Disc Jockey Mind His Own Business?

In December 1947, Widman left KSTP radio “in a huff,”  following an interview with actress Virginia Mayo.   She was in town promoting The Secret Life of Walter Mitty, and ended up in tears after the interview.   Apparently the “KSTP switchboard lit up like a yule tree,” with complaints from listeners.   He moved back to WMIN.  In 1947 he was listed as a member of the Vulcan Krew at the St. Paul Winter Carnival

In January 1949, Widman, described as an “irascible disc jockey,” was fired from WMIN for munching popcorn on the air.   He then moved to WDGY radio.

In August 1953, he appeared at the Richfield Round up with Slim Jim Iverson from KEYD and Cedric Adams from WCCO.

I can’t find much information about Sev Widman after his show ended on WTCN.   It appears he was an owner of WSJW radio in Maplewood.   It was an “all polka” station in the sixties where Roger Kent worked.

UPDATE:  I received an email from Bob Kosmaksk.   Bob recalled listening to Sev Widman on the radio many years ago.

I recall from my youth, Sev opened up his radio show with a couple of Dust bowl/depression songs.

“Dear Oke if you see Arky tell em Tex got him a job squeezing oil out of olives, Orange fountains on each corner” etc etc.

“You can’t go swimming in a pool hall”

“There ain’t no bones in a Hot Dog”

The first lyric appears to come from “Dear Okie” by Rudy Sooter and Doye O’Dell, possibly from a recording by Doye O’Dell in 1948.   The others are unknown.