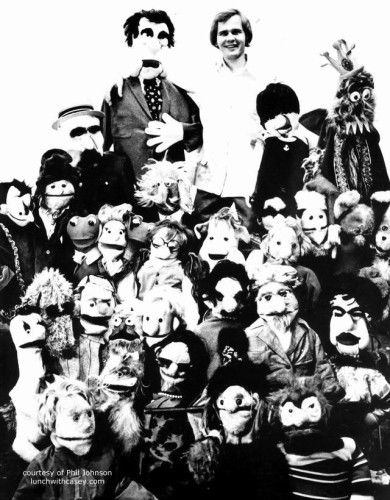 Phil Johnson passed away at the age of 69 on August 30, 2016.   Phil was the puppeteer on The Happy Hour which ran from 1970 to 73 on WTCN, channel 11.   Phil performed as “Fred” and the various puppets opposite the host, Henry Novotny.   After the cancellation of the show, Phil joined Roger Aswumb as Charlie Caboose on the The New Casey Jones Show, which ran on KMSP, channel 9 on Saturdays in 1974.

Phil contacted me several years ago and provided the only images I have from The Happy Hour.   He said that the time on The Happy Hour was a learning experience.  “The material I had written for “The Happy Hour with Fred & Friends” was written to be done with a partner who at first was somewhat less engaged in the process than I was. I found that was an easy situation to prepare for as long as the straight man would cooperate by reacting genuinely and laughing in the right spots.”

He had very fond memories of working with Roger Awsumb.   “What I liked the most about Roger was what some people liked the least: he was always “in the moment,” and he was never “prepared.” Scripts consisted of hastily scribbled handwritten notes, simple lineups of what we would be doing for the half-hour. Of course, I would meticulously prepare and write out everything I was going to do, because I was just a young kid and didn’t know you could actually become a star by just being yourself…. I remember how once he lost it totally on camera while he was talking to the puppets. Giggling uncontrollably, he sent us to a commercial, and tried to stifle his laughter. He leaned over the puppet stage and said, “I keep forgetting they’re not real!” His delight was genuine, and the fun was real.”

Phil Johnson started acting at The Brave New Workshop in 1966.   Following his stint on The Happy Hour and The New Casey Jones Show, he continued to perform at various venues including the Minneapolis Friar’s Club.   He performed with his partner Cliff Walinski.   Phil told me they used the set from The Happy Hour for years, transporting it all over the United States.   He noted “It ended its life in the dumpster at KARE-11 in 1987. Pretty beat up by then, too.”

Phil is survived by his siblings, Paul, Tim, Tom, and Jan, as well as nephews, nieces and friends.   Memorials can be made to the Animal Humane Society of Golden Valley.