In February 1954, Captain 11 debuted on WMIN, Channel 11, featuring a young Jim Lange as the host of the program.    It was the beginning of a long career in television for Lange, who would gain greater fame as the host of The Dating Game on ABC.    Jim Lange died on Tuesday, February 25 at the age of 81.

Last summer I met up with Jim in St. Louis Park at the Pavek Museum of Broadcasting to interview him for a documentary I am working on.   He shared wonderful stories about the early days of channel 11, working with Steve Cannon (Wrangler Steve) and Roger Awsumb (Casey Jones).    He was attending the University of Minnesota and one of his instructors told him that WMIN was looking for someone to play a “super hero man of the future.”   He auditioned for the role and was soon hosting old serials such as Flash Gordon and Don Winslow.   He described how his job was to be the “kind uncle”  telling kids to obey their parents and brush their teeth. 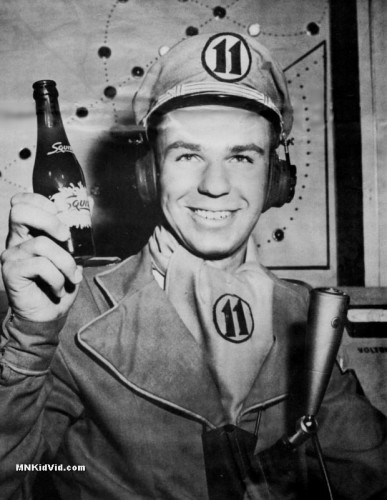 Of course, he was also their to sell products.  One day he was promoting Bosco, a chocolate syrup that you would mix with milk.   Jim’s job was to mix up a glass of Bosco on the air.    But that day, someone has refrigerated the product, making it too thick to stir.   Jim stalled and stalled while he stirred liquid until it was mixed enough to drink.    Captain 11 proved to be a successful show with advertisers and Squirt soda reported a large increase in sales thanks to Jim’s promotion of the drink.

In the fall of 1954, Jim joined the Marines, and Jack Rebney took over the role.  Eventually Chris Wedes played Captain 11.

Following his discharge, Jim returned to Minneapolis, working as a local announcer.   He heard about a job on California from his friend Steve Cannon, and the two of them drove west.   They joined KGO, playing rock and roll at a time when few people really knew what rock music was.   The station wasn’t happy with the format, so they fired pretty much everyone except Lange who had been working the late shift.  Cannon moved back to the Twin Cities, but Lange continued working in radio in San Fransisco.   This lead to his big TV break as a co-star on the Tennessee Ernie Ford Show.    And in the mid-sixties, he  was hired by Chuck Barris to host The Dating Game.

Jim was a wonderful man with a big smile and a warm friendly voice.   He had wonderful stories about his broadcast career and didn’t have a bad thing to say about anyone.   He consider himself to be the luckiest guy in the world and loved working in radio and television.    I was very fortunate to spend a few days with him last summer.  I took Jim to dinner on his 81st birthday last August 15.  We were joined by Julian West, author of What a Card, the biography of Clellan Card.   We sang Casey’s Happy Birthday Song.