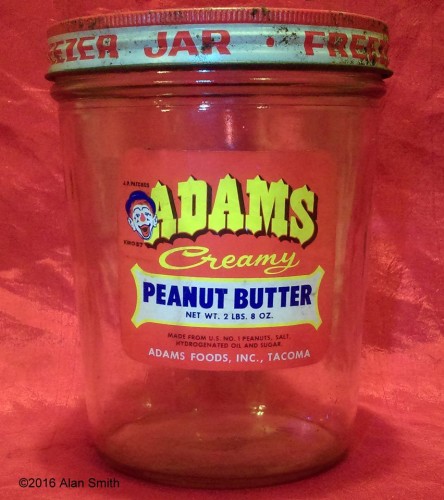 Chris Wedes played J.P. Patches on Channel 11 until 1958 when he moved to Seattle, WA.   J.P. Patches became a hit show throughout the Northwest, running until 1981.    Over the years, J.P. Patches promoted many products including Adams Peanut Butter.    This rare jar featured J.P. on the label and probably dates to the early 1960’s.

Alan Smith saw this on ebay and had to have it for his collection.  When the bidding ended, the total rang up to $204.28!  Alan was  a friend of Chris Wedes, but ironically, he grew up in the Twin Cities, watching Lunch with Casey.    I was fortunate to meet him on a recent trip to Seattle.  You can read more about Alan, the peanut butter jar, and see some pictures of his J.P. Patches collection on the MyNorthwest website

Thanks to Alan Smith for sharing!