One of the lesser known, and largely forgotten kids shows in the Twin Cities was Hi Jerry with Sister M. Cabrini Bongiovanni.   Sister Carbrini was a Catholic nun who combined entertainment and performing with her ministry.    Patrick Sweeney remembers the program.  “Jerry was a ventriloquist’s dummy and the ventriloquist was a nun named Sister Mary Cabrini. Obviously there were religious overtones.”  He added that it was “a Saturday morning show that ran for a few years on WTCN in the early ’70s.”  and  “I recall the show having a live audience.”

Rick Cunningham appeared on the program when he was a young man and shared his memories.

Sister Cabrini was a very popular Nun in the Twin Cities. A lot of performing as a ventriloquist. The two characters I remember were Jerry as you mentioned and Lambchop. As I recall, it was the Archdiocese of St. Paul/Mpls. That produced two TV shows on which she appeared and that were filmed at WTCN TV (precursor to KARE 11) — filmed at the Calhoun Beach Hotel studios. Shows were: “Uncle Marty’s Party” and “Hi Jerry”. Father Gordon Mycue and a Reverend Ward (forgot his first name) helped produce it. Sister Cabrini was a Notre Dame Nun who I think was living/working at Our Lady of Guadalupe parish in St. Paul. I got involved when they were looking for someone to do magic on the shows so I did several spots. My brother Jim appeared in one of them. Had a lot of fun. She was fun to work with, may she Rest In Peace.

I was able to find out a bit more about Sister Cabrini, who sadly passed away in 2016.  She was born Frances Bongiovanni in St. Paul in 1925, and grew up in the Twin Cities.   In 1947, she took her vows, and spent over thirty years as an elementary teacher throughout the Midwest.  Her obituary stated:

She became fascinated with ventriloquism after seeing Shari Lewis and her puppets on television. Using a library book as a resource, Sister Cabrini began practicing in the convent. She wrote, “I was richly rewarded one day at school when I was using a moving mouth puppet to say good-bye to the children. One youngster said in amazement, ‘Gee, Sister! It looks like he’s really talking!’” Using another book, she found that it was possible to make her own ventriloquist figure. She had been given a piece of basswood and used borrowed scout knives to carve Jerry, her own little boy figure, complete with moving mouth and eye. 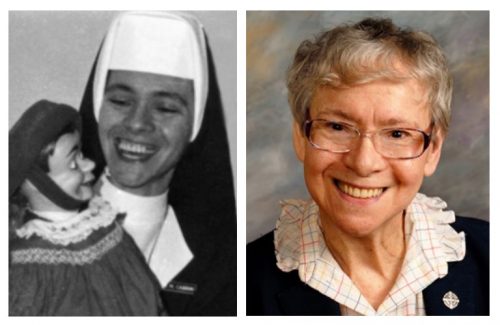 In 1976, Sister Cabrini transitioned to become a full time performer in what she described as an “entertainment ministry.”    Her obituary continued:

Sister Cabrini expanded her repertoire to include magic, original music and chalk art…. She joined the Fellowship of Christian Magicians, a wonderful resource for her. She prepared programs that could be adapted to any type of audience “from two to ninety-two.” A blurb in the Minneapolis Star Tribune stated: “She appears before all types of audiences – public and parochial schools, Sunday Schools, homes for the elderly, colleges, Scout banquets, hospitals and institutions for the handicapped. ‘I have always been a ham,’ she said. ‘As a kid, I loved to dance, sing and write poetry. I thought I had given all that up when I entered the convent. But the Lord turned right around and gave it all back to me.’”

Sister Cabrini retired from entertaining in 2003,but continued to perform on occasion. She passed away at the age of 92 on August 31, 2016. 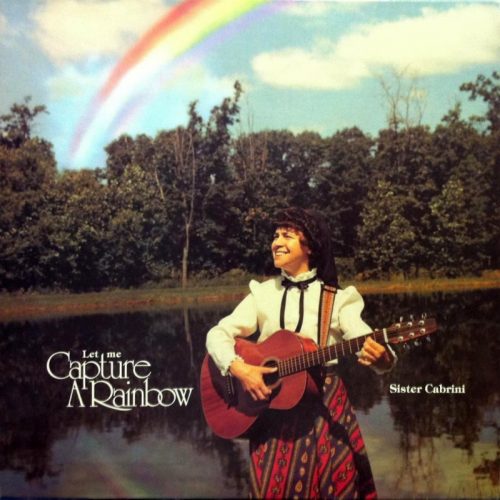 Sister Cabrini recorded this album in 1983 in Minneapolis.