TV Digest from December 14, 1968 featured a great profile on Ken Wagner and the Grandpa Ken Show.    The program was revamped a bit at that time, and the article features a lot of information about the program as it was formatted at the time. 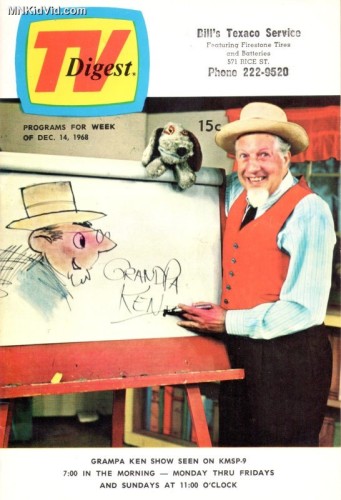 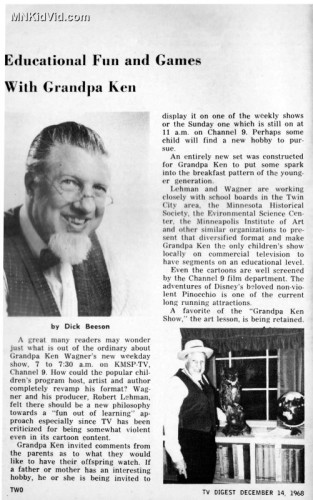 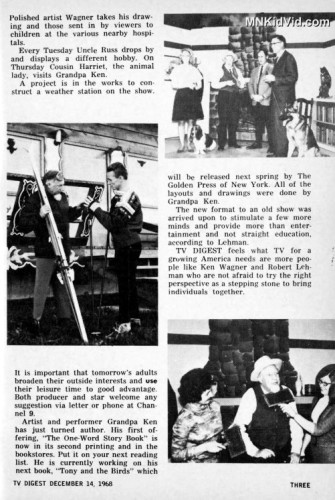 A Great many readers may wonder just what is out of the ordinary about Grandpa Ken Wagner’s nee weekday show…   How could the popular children’s program host, artist and author completely revamp his format?  Wagner and his producer, Robert Lehman felt there should be a new philosophy towards a “fun out of learning” approach especially since TV has been criticized for being somewhat violent even in its cartoon content.

Grandpa Ken invited comments from the parents as to what they would like to have their offspring watch.  if a father or mother has an interesting hobby, he or she is being invited to display it… Perhaps some child will find a new hobby to pursue.

An entirely new set was constructed for Grandpa Ken to put some spark into the breakfast pattern of the younger generation.

Lehman and Wagner are working closely with school boards in the Twin City area, the Minnesota Historical Society, the Enviornmental Science Center, the Minneapolis Institue of Art and other similar organizations to present that diversified format and make Grandpa Ken the only children’s show locally on commercial television to have segments on an educational level.

Even the cartoons are well screened by the Channel 9 film department. The adventures of Disney’s beloved non-violent Pinocchio is one of the current long running attractions.

A favorite of the “Grandpa Ken Show,” the art lesson is being retained.  Polished artist Wagner takes his drawings and those sent in by Viewers to children at the various nearby hospitals.

A project is in the works to construct a weather station on the show….

Artist and performer Grandpa Ken has just turned author.  His first offering, “The One-Word Story Book” is now in its second printing… He is currently working on his next book, “Tony and the Birds,”.. All of the layouts were done by Grandpa Ken.