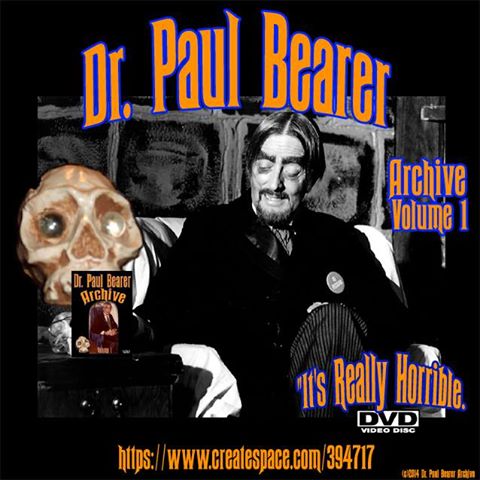 Horror Incorporated was the monster movie franchise in the Twin Cities, bringing us all the great Universal monsters like Frankenstein with Boris Karloff and Dracula with Bela Lugosi.   For most of the shows run, there was a generic open of a featuring a hand crawling out of a coffin. But for a short while, in 1974, the show was hosted by Dick Bennick as Dr. Paul Bearer.    Bennick popularized the character at WTOG in Tampa, Florida.   WTOG was owned by Hubbard Broadcasting which also owned KSTP, channel 5 in Minneapolis.   Bennick’s run at KSTP was brief, but the character remained popular in Florida until he passed away in 1995.

A number of his movie introductions from “Creature Features” and “Dr. Paul Bearer Presents” are collected on a new DVD.   These are just the hosted segments, not the full movies.    Included are the intros to Diary of A Madman, Forbidden Planet, The Blob, Gamera Vs. Zigra, Godzilla Vs. Monster Zero, and many others.

One of these days I’ll get around to posting more about Horror Incorporated. Here’s a later clip of Dr. Paul Bearer from 1991