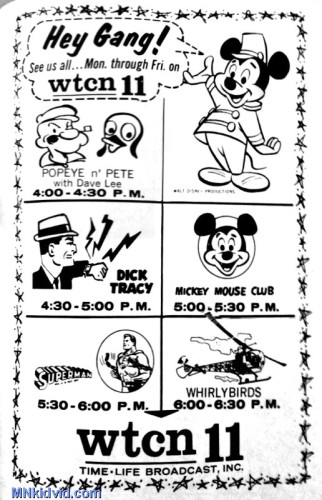 Here’s an advertisement for WTCN’s afternoon programming from TV Guide, Sept. 8 1962.    Popeye and Pete was the title of Dave Lee’s show at the time.   The Dick Tracy Show was an animated series produced in 1961-62.   Mickey Mouse Club was reruns of the show produced from 1955-59.   The Adventures of Superman was the George Reeves series orignally produced from 1952-58.  Whirlybirds was  a syndicated show produced by Desilu from 1957-60, about the pilots of a charter helicopter company.