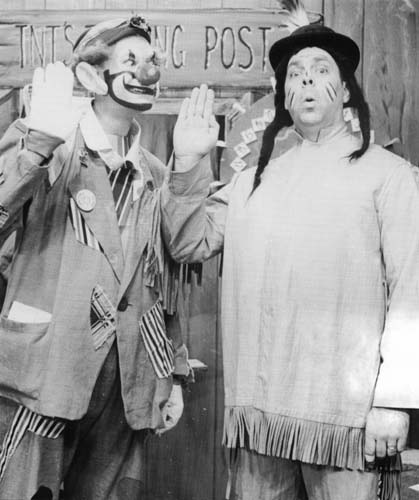 Daryl Laub as T.N. Tatters and Rodger Kent as an Indian

Daryl Laub originated two children’s TV characters on WTCN, Channel 11 called Skipper Daryl and J.P. Patches. When he went over to KSTP-TV Channel 5 in April 1955, Daryl brought his alter egos with him — albeit in slightly different guise: Skipper Daryl became Captain Daryl and his clown character J. P. Patches turned into T. N. Tatters. Because the two shows aired live back to back, Daryl went through hectic makeup changes every day.

T. N. Tatters was a hobo clown of the Emmett Kelly variety. . His show was pretty strange, too, featuring a flying snake with a voice like The Great Gildersleeve, a talking TV set, a weird whispering phantom doll, and assorted other bizarre guests. T. N. Tatters ran on Channel 5 until September 1962.