This fascinating article offers a vivid description of Daryl Laub’s programs on KSTP, channel 5, shortly after the programs moved from WTCN, channel 11.     The T.N. Tatters show is familiar and carried over from the J.P. Patches show on WTCN.   However this is the first reference I have seen regarding “Kaptain Kartoon” and him being an “old salt.”    Daryl Laub portrayed “Skipper Darl” on WTCN, and this was later known as “Captain Daryl” on KSTP.    My guess is that the name “Kaptain Kartoon” was a short lived title of the character, prior to becoming Captain Daryl.

Other things we learn is that Kaptain Kartoon has a pet monkey named Joe.   Later Joe would become the companion of T.N. Tatters.    Terrytoons (possibly including Heckel and Jeckel, Mighty Mouse) were featured.  The “dunderheads” was a popular segment and a surviving clip of this was included in the Hey Kids DVD from the Pavek Museum. 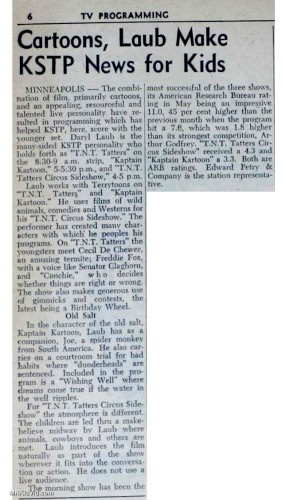 The combination of film, primarily cartoons, and an appealing, resourceful and talented liver personality have resulted in programming which has helped KSTP, here, score with the younger set. Daryl Laub is the many-sided KSTP personality who holds forth as “T.N.T. Tatters” on the 8:30-9 a.m. strip, “Kaptain Kartoon,” 5-5:30 p.m., and “T.N.T. Tatters Circus Sideshow,” 4-5 p.m.

Laub works Terrytoons on “T.N.T. Tatters” and “Kaptain Kartoon.” He uses films of wild animls, comedies and Westerns for his “T.N.T. Tatters Circus Sideshow.” The performer has created many characters with which he peoples his programs. On “T.N.T. Tatters” the youngsters meet Cecil De Chewer, an amusing termite; Freddie Fox, with a voice like Senator Claghorn and “Conchie,” who decides whether things are wright or wrong. The show also makes generous use of the gimmicks and contests, the latest being a Birthday Wheel.

In the character of the old salt, Kaptain Kartoon, Laub has as a companion, Joe, a spider monkey from South America. He also carries on a courtroom trial for bad habits where “dunderheads” are sentenced. Included in the program is a “Wishing Well” where dreams come true if the water in the well ripples.

For “T.N.T. Tatters Circus Sideshow” the atmosphere is different. The children are led thru a make believe midway by Laub where animals, cowboys and others are met. Laub introduces the film naturally as part of the show wherever it fits into the conversation or action. He does not use a live audience.

The morning show has been the most successful of the three shows, its American Research Bureau ratings in May being an impressive 11.0, 45 percent higher than the previous month when the program hit 7.6, which is 1.8 higher than its strongest competition, Arthur Godfrey. “T.N.T. Tatters Circus Sideshow” received a 4.3 and “Kaptain Kartoon” a 3.3. Both are ARB ratings. Edward Petry & Company is the station representative.