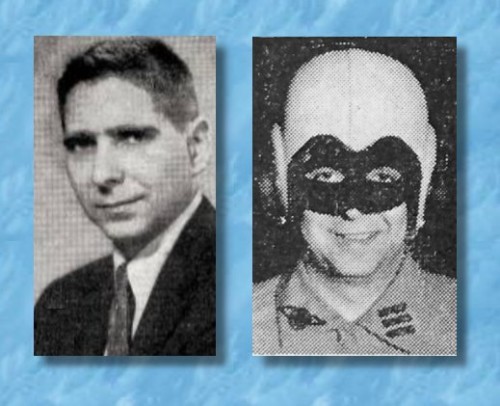 Commander Saturn appeared briefly on televisions in the spring and summer of 1955.   The show ran weekday afternoons on KSTP-TV, Channel 5, and was off the air by fall.    Commander Saturn was played by Lan Singer, and few details were known about him.

David Singer, Lan’s son, recently contacted me and provided some further information and a photo of his father.

Lan Singer worked in broadcasting around the country.  Prior to his stint in Minneapolis, he worked in radio in Richmond, VA (WLEE), Huntington, WV, Atlantic City, NJ (WMID), and Milwaukee, WI (WMLO).   After leaving Minneapolis, Singer went back east to Roanoke, VA.   At some point, he changed his name to “Gregg Jordan” and joined WHB in Kansas City, MO, where he was a popular evening announcer.

The photo of Lan Singer/Gregg Jordan is from an advertisement in Broadcasting Magazine in 1957.   He is described as an “…extremely bright and bubbly air star.  Tall, handsome, glib… fast paced.  Highest rated evening show in Kansas City. 7-10 p.m. nightly.  Has seen radio from many points of view: Salesman, programming, news, sports, management.”

Following his time in Kansas City, Singer  moved on to Denver, CO, and Albuquerque, NM and eventually to KGO in San Francisco, where he was Sports Director in the early 1970’s.  He died in 1994.

There is an audio clip from KGO radio in 1971 that features Gregg Jordan doing sports.   You can hear it on this page.    Jordan can be heard about 38 minutes into the broadcast.

My thanks to David Singer for providing details about his father’s career.