This item is the earliest known piece of Clellan Card memorabilia, postmarked February 1937 ­ just six months after his Almanac of the Air morning radio program began. 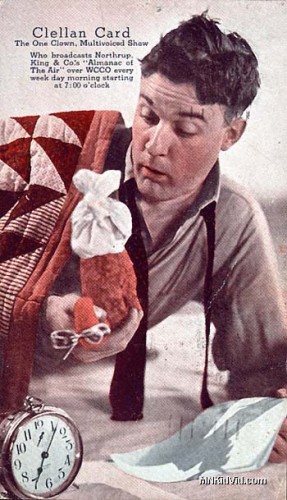 In the photo, Clellan has what is probably a radio script in his left hand, while in his right he appears to be holding a small stuffed animal with a kerchief tied around its head. It’s not known for sure, but the toy may represent Mahitabel or Noggins, two of Clellan’s earliest characters.

The message on the back indicates that the show was originally planned to run for just a single season, but the program proved to be so popular that it lasted for eight years. In fact, it was still popular when it was killed by CBS, which usurped Almanac’s timeslot for a network news show.