Russ Nyberg was a regular guest on the Grandpa Ken Show, on KMSP, channel 9.   His youngest daughter, Delayne Nyberg Strand, was kind enough to share some of her memories of her father, and the Grandpa Ken Show. Delayne remembers “when I was a small child I spent most of my time with my dad […] 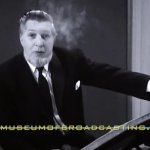 Ken Wagner is well known to Minnesota kids as Captain Ken and later Grandpa Ken on KMSP, channel 9 throughout the 1960’s.    Before moving to the Twin Cities in 1960, Wagner was a popular kids show host in the Quad Cities area of Iowa.    In addition to playing Captain Ken, he hosted a commentary show […] 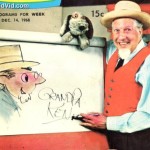 TV Digest from December 14, 1968 featured a great profile on Ken Wagner and the Grandpa Ken Show.    The program was revamped a bit at that time, and the article features a lot of information about the program as it was formatted at the time. A Great many readers may wonder just what is out […] 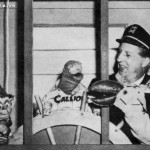 In 1960, Ken Wagner moved his show from WOC-TV in Davenport, Iowa to KMSP-TV in Minneapolis.  He actually hosted two programs.  The first was Kartoontime at 8AM, carrying the title of Dave Lee’s program.    The second show was Cap’n Ken’s Cartoon Showboat, which aired at 6PM. These photos are from a 1963 magazine article.  The […]

Ken Wagner entertained Minnesota children from 1960 to 1973 on KMSP, channel 9.  When the show began, Wagner was known as Captain Ken, a character he originally created for WOC-TV in Davenport, Iowa.   In later years, the Captain retired and was known to viewers as Grandpa Ken.    A talented artist, Wagner would often sketch out […]