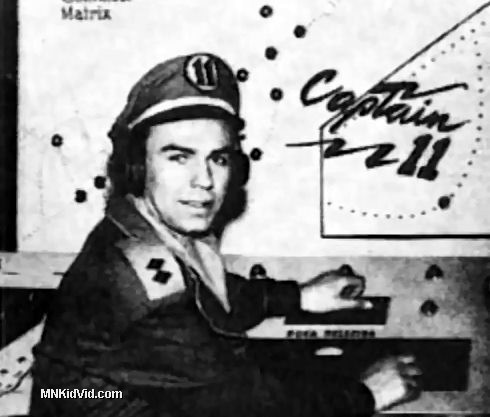 The early days of WMIN, channel 11, featured a number of children’s programs.  One of the first, starting in 1954 was Captain 11, which aired on weekday afternoons and featured old movie serials such as Buck Rogers and The Lost Jungle.   According to channel 11 director Al DeRusha, the set was made of parts from old pinball machines with flashing lights.   They made use of sound effects such as roaring rocket engines.

Captain 11 was originally played by Saint Paul native Jim Lange.   Lange started in radio, winning a local contest while still in high school.  He studied broadcasting at the University of Minnesota and served three years in the Marines.   He left channel 11 in 1955 and moved to California where he became a popular disc jockey at KGO and later KSFO.   In 1965 he begain hosting the popular game show, The Dating Game, continuing for 17 years.    He worked in radio until his retirement in 2005. 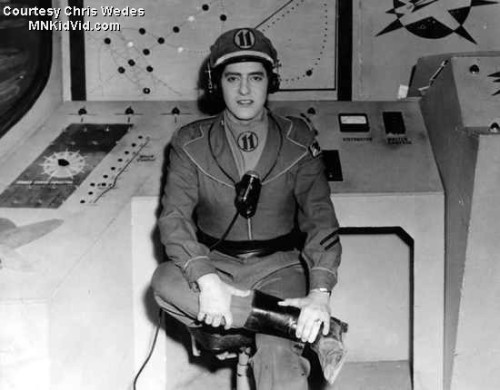 Chris Wedes took over the role following Jim Lange’s departure.    Chris was a man of many hats at channel 11, playing Joe the Cook on the Casey Jones show and his own program, as well as Chuck Wagon Chuck alongside Wrangler Steve, and eventually taking over J.P. Patches from Daryl Laub.    Chris left Minneapolis in 1957 to work in Seattle where he hosted the long running J.P. Patches show until 1983.    He continued to make personal appearances through 2011.

Other posts about Captain 11: