A couple weeks ago I posted about the Captain 11 mystery.   I was sharing Captain 11 photos with Jim Lange and he pointed out that two of the photos were not him.   The pictures were clearly not Chris Wedes either.    After some further discussion with Jim and Al DeRusha, a floor director at WMIN in those days, there were some memories of another person playing the part. 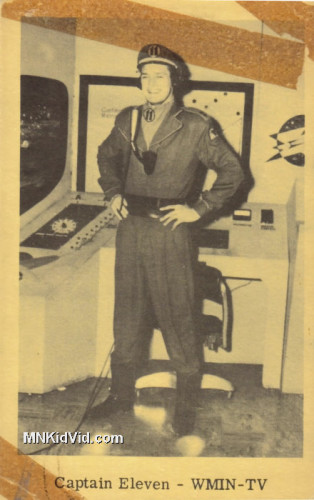 Here is a vintage Captain 11 promo card from around 1955, showing the unknown Captain 11.

After I posted about this mystery, I received an email from Pat Sweeney.    Pat has done a lot of research on the early days of children’s TV in the Twin Cities.   A lot of the materials on this site and the Lunch with Casey website came from Pat’s collection.    Back in 1975, Pat wrote a high school term paper about the history of children’s shows in Minneapolis and St. Paul.   As part of the project he interviewed Roger Aswumb, better known to us as Casey Jones.  In their conversation, Roger identified the three Captain 11 actors as Jim Lange, Jack Rebnee (or Rebney), and Chris Wedes.

At this point, I had never heard of Jack Rebney.   A quick search on the internet brought up a lot of movie reviews for a documentary called Winnebago Man from 2009, but not a lot about a broadcaster named Jack Rebney.

I did a little further research in some Broadcast Magazine archives.   At this point I found some brief references to John M. Rebney moving from his Minneapolis advertising agency to work at WBBM in Chicago in May 1956, and Jack Rebney leaving WBBM and going to KNX in Los Angeles in 1958.   So is was possible that Jack Rebney was our man.

And now the story takes a fascinating twist.

In researching Jack Rebney, I learned that former WBBM broadcaster had worked on a promotional film for Winnebago motor homes in 1988.   Someone compiled a series of outtakes from this commercial which featured a frustrated Jack Rebney using very colorful language.   This blooper reel became legendary and was popularly traded tape among people that worked in the television industry.    Sometime around 2005, the video emerged on YouTube, was rediscovered, and went viral.   It has been listed as one of the 100 Greatest Internet Memes of All Time.

Filmmaker Ben Steinbauer was fascinated by the viral video and went in search of the elusive Jack Rebney.   His documentary Winnebago Man tells the story of tracking down Rebney, their interviews and conversations, and Rebney’s reaction to the notoriety of the videos.   Here is a censored version of the trailer for the movie.

The movie came out in 2009 and has been very popular on the independent film circuit.   It  has garnered positive reviews from the New Yorker, Roger Ebert, NPR, People Magazine and many others. The film has won a number of awards including the Austin Film Award, the Audience Award at the Las Vegas International Film Festival, and the Grand Jury Award at the Edmonton International Film Festival.

Here is an interview with Jack Rebney and Ben Steinbauer posted by Studio Q.

In reading about the movie, I learned that Jack Rebney grew up in Minneapolis and was working in television in 1953. But that this point, I still did not have confirmation that this Jack Rebney was the unknown Captain 11 from 1954-55.

I reached out to the director of the movie, Ben Steinbaur and he was quick to follow up.

Yes! The mystery of Captain 11 has been solved. Jack was Captain 11 for some amount of time and ultimately left that position and went into radio and then ultimately wound up in Chicago working for CBS. He tells me to extend his kindness to you.

So there you have it, Jack Rebney was the mystery Captain 11.    My thanks to Pat Sweeney, Jim Lange, Al DeRusha, Ben Steinbauer, and Jack Rebney for all their help in sorting out this bit of television history.

Jack Rebney is retired and living in norther California.   Visit the Winnebago Man website for more about the movie.   You can buy Jack Rebney’s book Jousting with the Myth on Amazon 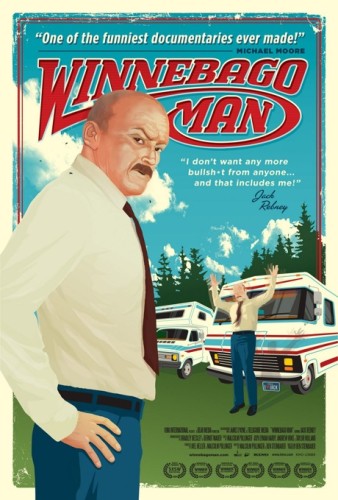